On Sunday 15 December we held a concert of carols and winter songs at Sun Rising, which turned out to be a wonderful event, despite a burst of rain in the middle!  The choir was organised by Felix Mindham (whose mother and brother are laid to rest at Sun Rising), and wonderfully led by Cathie Zara, with singers from two local choirs: Low Wimmin Singing and The Leamington Plotters.

Among the songs and carols were old favourites that everyone could sing along to, together with less familiar arrangements, and a few new songs, finishing up with The Twelve Days of Christmas.  Here’s the choir with their Twelve Days cards. 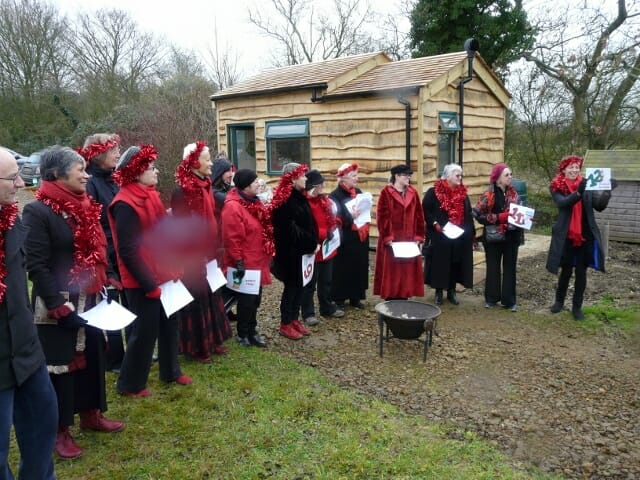 With 50 – 60 people coming on the day, the warmed mince pies and mulled wined disappeared quickly, as did the array of greenery for winter wreaths provided by local florist Amanda Luther.  As a fundraising event for The Friends, we’ve yet to declare an exact figure, but we believe we took around £60 after expenses.

Very many thanks to everyone who contributed to and supported the event, with energy and organisation, bringing voices and enthusiasm.  Let us know what you thought of it!