There are plenty of tasks in a nature reserve burial ground that need attention in the spring.  There is the compost heap to be turned, allowing last year’s floral tributes to compost in the warmth of the summer, and ensuring we have a lovely soil for tree planting in December – a few of you will have seen us, filthy in the midst of the job!

Another job is dealing with the algae in the pond.  While algae is a good food source for pond creatures, it can become invasive, and it looks rather ugly.  Last year, we had very little, but this winter has left us with a little too much, so we’re trying a new system with barley straw.  We’ve used straw before, but not in this way, so we’ll see how it does.  As the barley rots, it starts a microbial reaction releasing hydrogen peroxide, which inhibits the growth of the algae.  It does need some warmth, so won’t do much while the water is still cold, but as the spring sunshine warms, hopefully the pond will start to clear. 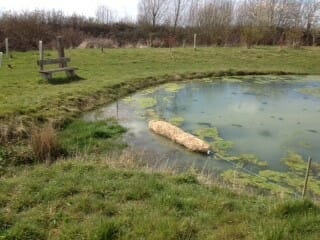 Barley Straw in the Pond

In a week or so we’ll be mowing paths and verges – not just so that visitors are able to walk through the reserve, but also to create that particular habitat that requires short grass.  The mowers work a little like controlled grazing animals!