With sunshine and showers, our areas of established wildflower meadow here at Sun Rising are now growing fast.  With half a dozen identifiable grasses, and more coming through, the yellow rattle is also at its height.  This little plant is crucial for meadows like ours: being semi-parasitic, Rhinanthus minor actually weakens the grasses.  In earlier times, it was a serious pest for farmers, reducing their hay crops significantly, but for us it is a blessing.  Taking some strength out of the grasses, it gives more space for the wildflowers we are looking to encourage.  This year, the yellow rattle is doing beautifully in the meadow.  After such a dry year, the grasses are not overwhelming, and it’s found its place.

You’ll see more poppies (Papaver rhoeas) in the meadow this year too.  These are a most peculiar plant – however often we (or families) sow seed, it nearly always fails.  In some years, I can sow half a pound of seed and just a few will reluctantly germinate in the stony tracks.  This year, there are a few patches that have come through.  As an arable weed, poppies require disturbed ground to germinate, so where they’ve been sown on new graves they are unlikely to come back next year.  They give a lovely bright colour at this time of year, when the meadow is otherwise mainly green and yellow. 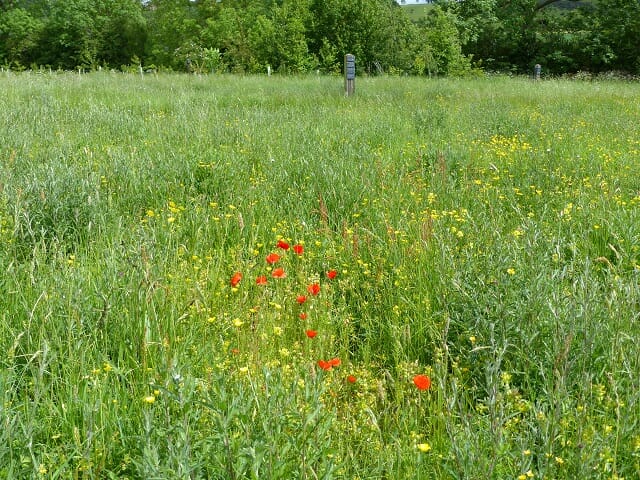 Look a little closer, and you’ll see the pink of the common vetch, and the deep red of the flower buds of the birdsfoot trefoil.  There have been brimstone and orangetip butterflies, peacocks, small tortoiseshells, small whites and small coppers, for a while; this week we spotted the first common blues.  In another week or so, the oxeye daisies will burst into flower, then the scabious, knapweeds, vetchlings and cranesbills.  It’s a wonderful time of emergence.  Even when the grey skies (and still very much needed rains) are leaving a dreary pall over the day, there’ll plenty to lift the soul.