This year, with such a damp autumn, there have been some wonderful fungi at Sun Rising.  Half hidden under fallen leaves, or in areas of longer wet grass, sometimes tucked up against the post of a tree plaque, there are so many different varieties.  My ability to identify them barely begins, but perhaps that allows my wonder and delight to be undimmed by knowledge, to be childlike and free.  There are tall shaggy white ones and big fat plate-shaped ones.  There are deep russet-brown ones, dark chocolate-brown ones, pinky ones, and every hue from cream to yellow.

Yesterday, as we began our tree planting, with 42 new trees put in along the track beyond the cairn, we came across a wonderful display.  Under the tarp covering our heap of composted bark we found mushrooms to make anyone pause. 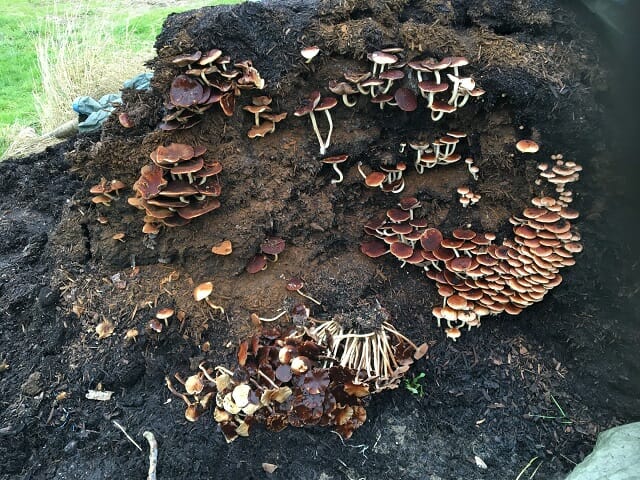 Of course, we need to be using the composted bark: over the coming three weeks of tree planting, with each tree needing its doughnut of mulch, we’ll make a pretty big dent in the heap.  But the mushrooms we see are only the ‘fruits’ of the fungi organism.  The body of the fungi is underground, as a network of mycelium – in this case, it is spreading through the composted bark.  The mushrooms will have shed their spores or ‘seeds’ into the bark.  As we break it up, putting the bark around each little sapling, we’ll be spreading the fungi around the new woodland areas.

Having written that, my mind is now full of questions!  There’s so much to learn.  I’m off to dig out a book on fungi …