On Wednesday last week, we hosted our first moth survey in seven months.  Indeed, it was the first time our principal recorder, Alan Prior, had been out recording in seven months.  During particularly bad winters, there may be short periods when it isn’t worth heading out, but this gap was unprecedented.  For Alan, who has been seriously mothing for over 18 years, it was the first time such a gap has been enforced: primarily by what he called the ‘truly relentless atrocious weather’ – persistent rain and winds – compounded then by the COVID-19 lockdown.

Setting up the light traps while serenaded by a garden warbler, he was keen to see what effect the winter had had on moth numbers at this his ‘favourite place’.  The other surveyor, Martin, kept the requisite distance, manning his own traps and Alan tells me that, as they ate their lunch (around midnight) ‘there were a lot of bats zooming about’ – no doubt themselves lunching on the moths!

By the time the last trap light was turned off at 3.45 am, they were both ‘very satisfied with a wonderful night’s moth recording’.  They’d counted in the region of 90 species, including at least 5 new for Sun Rising.  When at last Alan made it to bed, he was ‘aching all over from not having done anything much for months,’ but ‘happily dozed off quickly with a big smile on my face’. 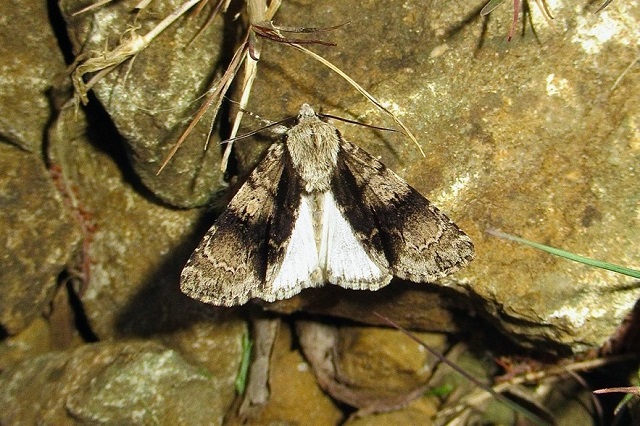 Nature doesn’t make science easy: there are so many variables for each situation.  In this case, worried as we were about the winter’s effect, a beautifully calm and warm night produced a very good result in terms of numbers and species.  We know that the developing nature reserve is helping to build numbers on site; for example, this alder moth was seen for the first time, perhaps because of the alder trees we’ve planted which are now doing so well.  It’ll take a few more months of surveys and data to give a clear picture.  Hopefully, we’ll see some resilience and many more beautiful moths.