There’s an extravagance of oxeye daisies here at Sun Rising at the moment. 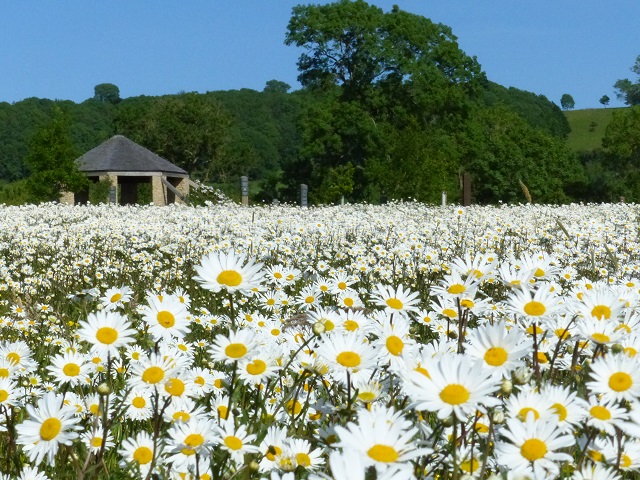 Oxeye Daisies in Michael’s Meadow, looking towards the Roundhouse

This is in the area known as Michael’s Meadow, the acre and a half which we have been working on to establish new wildflower meadow.  It’s been a challenge from the start: having sown the meadow in October 2017, the problems started with the tremendous icy storms of March 2018, when seed-rich topsoil washed away with the melting snow.  That summer we had drought, when the earth baked dry, leaving large patches of bare soil, which were happily populated with groundsel and thistles.  With a little fresh seed in the autumn of 2018, the summer of 2019 was really its first season, and many of you will have seen the rich displays, notably of oxeye daisies and yarrow.

However, when rain began in late summer, it was persistent, continuing for some seven long wet months.   A wildflower meadow needs grasses, and as yet few have really taken hold in Michael’s Meadow.  The grasses are important to the habitat, not only providing a richer ecosystem, but also helping to create and maintain a good soil structure.  Without grasses, this meadow became very waterlogged through the winter.  As spring came, we hoped for a little more balance – but we’ve had virtually no rain since March, and the scorching heat has created deep cracks in the clayey soil.

As a result, we have oxeye daisies in great abundance.  These sturdy plants can cope with very tricky conditions, and they are thriving where other wildflowers have found it harder to take hold.  Indeed, often a year or two of thick oxeye daisies mark the start of a developing wildflower meadow: they are quick to get themselves established.  However wonderful the sight is, this is actually only a stage in the process of creating a successful meadow  In time, the many other species we are nurturing will begin to come through: the scabious, trefoils and vetches, agrimony and sorrels, with their beautiful flowers, but also the grasses.  As the meadow establishes, this amazing display won’t be an annual feature.  Instead, it will be far richer mix of plants, colours and textures, with all the associated richer biodiversity of bees, butterflies and other invertebrates.  Until then, let’s enjoy the fantastic exuberance of the oxeye daisies.